An unexpected takeover battle between Boston Scientific and Johnson & Johnson for control of Guidant seems bound to send aftershocks through the medical device industry.

There is widespread speculation about the effects on prominent competitors like Medtronic and St. Jude Medical in Guidant's main business of electrical implants that regulate heart functioning. Investors and analysts also wonder who will end up with Guidant's business of making stents and other devices used to treat circulatory illnesses.

But there are less obvious industry niches that may also be affected by the outcome, like the one occupied by Cyberonics, a Houston-based company in which Boston Scientific has a 15 percent stake. The company and its stock have attracted attention as federal regulators first rejected, then reconsidered and approved Cyberonics' nerve-stimulating device as a treatment for severe depression.

Cyberonics is the dominant patent holder for implanted electrical stimulators that attach to the vagus nerve, a pathway from the brain down into the abdomen with branches to some major organs. Its product, the VNS Therapy System, has been in use in this country since 1997 to control epilepsy.

In recent months, though, Wall Street has been abuzz with conflicting views about the technology's prospects in a far larger market, the one for depression treatments. 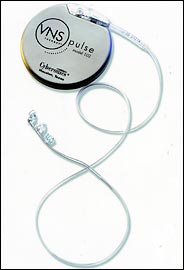 Nerve stimulation involves the use of devices that are similar to Guidant's pacemakers and heart defibrillators, but are attached to the brain or other parts of the nervous system to treat conditions like Parkinson's disease, epilepsy and chronic pain. Such devices constitute a $930 million market that is on its way to $2 billion in 2010, according to Lazard Capital Markets.

Such a sale would be unlikely to raise much more than 1 percent of the $12.5 billion Boston Scientific has talked about borrowing to acquire Guidant. Still, the company said in a conference call on Monday to discuss earnings that it would pull investments out of some longer-term research and development programs as part of the revamping needed to make the Guidant deal pay off.

Given the interest in nerve stimulation and the small number of companies with products, Johnson & Johnson is seen as a potential buyer if Boston Scientific sells its Cyberonics stake. But such a sale seems unlikely in the near future under any circumstances because Cyberonics' value is very much up in the air.

It was not until July that federal regulators finally cleared Cyberonics' to start selling the VNS device to treat severe chronic depression in patients who did not respond to other therapies. Cyberonics estimates the potential market at 4.4 million Americans, or roughly 10 times the number of epilepsy patients that may benefit. The VNS, the size of a small pocket watch, sells for about $15,000.

As usually happens once a device gets a green light from regulators, Cyberonics now has the twin challenges of getting insurers to pay for its product and persuading doctors - psychiatrists in this case - to prescribe it. And while securities analysts are telling investors that Cyberonics will eventually succeed, they differ widely on when.

"It's a semi-lottery ticket," said Mark Reiner, manager of the Doctors Investment Fund in , which invests in a variety of stocks, including some in health care.

Medicare and many major insurers routinely cover VNS for epilepsy and have begun to approve occasional implants for depression case by case, but they continue to classify the depression treatment as experimental and unproved.

Cyberonics reported late last month that it lost $40.9 million on sales of $56.1 million in the six-month period ended Oct. 28.

Its shares, buoyed by acquisition speculation in the medical device industry, closed yesterday at $29.56, up 4.8 percent this week. That is still down substantially from the closing high of $46.65 late in June, when the regulatory approval for depression treatment was anticipated and hopes were high for a fast commercial start.

In its conference call, Cyberonics said that 200 depression patients had received the device since its approval. But interest is high, the company said, citing insurance and clinical forms filled out by several thousand prospective patients and 1,200 psychiatrists. Of course, no one knows how many of the patients will end up with the implants.

Optimists on Wall Street predict that the company could report profits by the end of next year. But Alexander K. Arrow of Lazard Capital Markets in recently warned clients not to anticipate profits before spring 2008 at the earliest.

Mr. Arrow has argued that revenue will not grow quickly enough to support the expanded sales and support force. He warns that this mismatch could lead to large losses, layoffs and revamping charges. Mr. Arrow, who advised investors to sell the stock in June when it was trading above $44, values it at $25 a share.

Insurers are balking in part because the data supporting nerve stimulation as a treatment for depression came from trials with design shortcomings that could have distorted the results. And while the number of patients who say they experience benefits appears to climb the longer they use the device, trial data analyzed by the Food and Drug Administration suggested that a large majority failed to achieve a sustained response.

Cyberonics proponents note that severe depression is so debilitating and so often leads to suicide that even slim rates of success could lead to widespread use of the VNS system.

"I don't expect any other devices in this space for two or three years," said Thomas Gunderson of Piper Jaffray. Mr. Gunderson expects the stock to outperform the market in 2006, although he reduced his 12-month price target in November, after the Cyberonics earnings report, to $40 from $50.

"Monopolies are always interesting," he said.