Experimental implant under the scalp zaps away crippling headaches 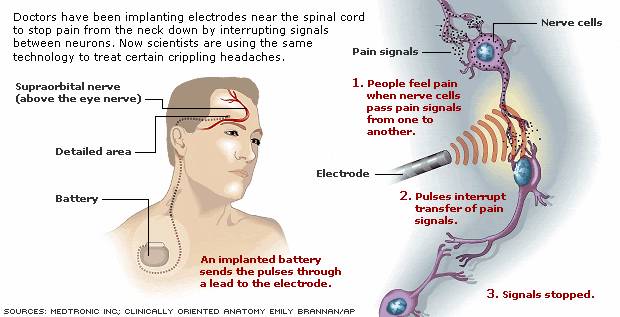 and every other treatment failed to help.

Then Dr. Sandeep Amin tried a last-ditch experiment. He hooked a tiny electrode to a needle and tunneled it under the skin by Lamesch's left eye, stopping atop the nerve responsible for her pain. Powered by a battery implanted near her collarbone, the device continually zaps that nerve with electric pulses - blocking the woman's pain.

"The minute he put it in, the pain was gone," says a grateful Lamesch.

An estimated 20 million Americans suffer severe headaches, and as many as 10 percent of them have intractable head or facial pain. Treatment after treatment fails. Some are true migraines, which stem from inside the brain, but others - mistakenly called migraines - result from damaged nerves along the face or scalp.

Now a few doctors are exploring how well nerve stimulators implanted in different spots along the head could rid some of that crippling, nerve-caused pain.

People feel pain when nerve cells pass signals from one to another until the "I'm hurting" message reaches the brain.

Doctors have long implanted electrodes along the spinal cord to block certain kinds of pain from the neck down by interrupting those signals. But the stimulator had to be placed above the pain site - so blocking pain in the back, legs or arms was doable, but not in the head.

Then came the discovery that stimulating head and facial nerves at skin-deep levels, not just directly against the spinal cord, could work. First doctors targeted the occipital nerve to alleviate whiplash-like pain or back-of-the-head headaches.

Now they're starting to target frontal headaches and facial pain, at the supraorbital nerve just above the eye.

It sounds logical, but "it really was surprising" to headache specialists that this new use of the implants seems to work well, said Dr. Robert Levy, a neurosurgeon at who has implanted stimulators in the foreheads of four people so far. The first two he treated have reached the two-year mark pain free.

Nerve stimulation "has done wonders for this kind of a headache," agrees Amin, an anesthesiologist and pain specialist at 's Rush-Presbyterian-St. Luke's , who implanted Lamesch and another patient who suffered unrelieved headaches after brain surgery.

It's simple to implant. A battery lies under the skin by the collarbone, and a small wire runs up the neck and into the scalp. Two implants are needed if pain is on both sides of the head.

A magnet turns the electric current on or off. Turned off, pain resumes - but the implant is vulnerable to security devices like those in airports, and must be switched off until patients pass by.

Nerve stimulation for headaches is still highly experimental. But a handful of doctors have asked stimulator maker Medtronic Inc. to fund studies to prove how well it works for different kinds of head pain. Medtronic is considering a study, first, of occipital nerve pain.

A $5,000 to $10,000 implant sounds extreme for headaches. But these are extreme cases: "I see patients who are significantly debilitated, on dozens of medications, with overwhelming medical bills," Levy says.

Levy and Amin doubt nerve stimulation would help true migraines. Instead, they hope to help people with the nerve-caused head or facial pain, whose options now range from narcotic painkillers - including implanted morphine pumps - to nerve-blocking injections into the spinal cord. Some even undergo attempts to surgically destroy the affected nerve.

"I had stopped living," says the , woman, who suffered pain in her legs and head after a tricky knee operation. A spinal cord stimulator stopped the leg pain so Amin finally adapted another one for her forehead. Now, she says, "I am bionic. ... I'm getting back on track."