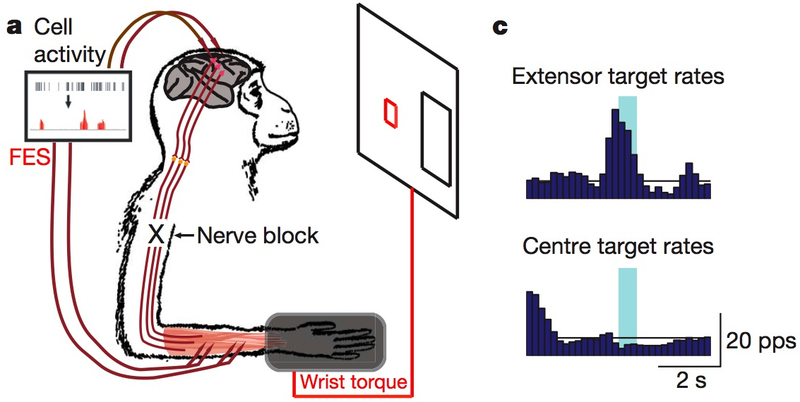 By firing a single neuron, paralyzed monkeys moved their hands after scientists created an artificial link between brain and muscle.

The monkeys were only temporarily paralyzed, and much work remains before the technique could be used in humans — but as an alternative technological approach to paralysis, it's a powerful proof-of-principle.

"The force could push a button, or press keys on a keyboard — but it was more forceful than that," said University of Washington biophysicist Eberhard Fetz.

Brain-machine interfaces have previously been used to control robotic arms and computer cursors, but they required researchers to identify entire populations of neurons already associated with movement. By contrast, Fetz and his colleagues identified neurons not previously associated with motion, then used them to stimulate individual muscles rather than a robotic device.

"We used a direct connection between single cells and single muscles, which are then able to provide an intuitive and immediate consequence of cell activity," said Fetz. "It's much more direct than decoding a large population of cells."

The researchers started by connecting a computer to electrodes planted in each monkey's motor cortex, a brain region that controls movement and remains functional in people paralyzed by spinal cord injuries.

Electrical activity in the monkeys' cortexes affected an on-screen cursor, which the researchers trained the monkeys to control in target-practice games. Then they anesthetized the monkeys, cutting off their brains' natural motor signaling.

Instead, the electrodes were connected to flexor and extensor muscles in the monkeys' wrists — and when they used their brains in the same way they'd previously controlled a cursor, electrical signals caused their muscles to contract.

"This study demonstrates a novel approach to restoring movement through neuroprosthetic devices," said National Institute of Neurological Disorders and Stroke program director Joseph Pancrazio in a press release. Pancrazio was not involved in the research, published today in Nature.

Fetz cautioned that the technique is far from ready, but was excited at its potential.

"Just about any cell in the motor cortex that could be recorded could be brought under volitional control," he said. "And it might involve having single cells trigger a programmed pattern of stimulation that triggers a coordinated movement, like grasping."

Instead of stimulating muscles, said Fetz, researchers could even stimulate the spinal cord.

"This typically produces a coordinated contraction of synergistic muscles," he said. "Stimulation there could be advantageous for generating more complex, useful movements."

Correspondence to: Chet T. Moritz1 Correspondence and requests for materials should be addressed to C.T.M. (Email: ctmoritz@u.washington.edu).

A potential treatment for paralysis resulting from spinal cord injury is to route control signals from the brain around the injury by artificial connections. Such signals could then control electrical stimulation of muscles, thereby restoring volitional movement to paralysed limbs1, 2, 3. In previously separate experiments, activity of motor cortex neurons related to actual or imagined movements has been used to control computer cursors and robotic arms4, 5, 6, 7, 8, 9, 10, and paralysed muscles have been activated by functional electrical stimulation11, 12, 13. Here we show that Macaca nemestrina monkeys can directly control stimulation of muscles using the activity of neurons in the motor cortex, thereby restoring goal-directed movements to a transiently paralysed arm. Moreover, neurons could control functional stimulation equally well regardless of any previous association to movement, a finding that considerably expands the source of control signals for brain-machine interfaces. Monkeys learned to use these artificial connections from cortical cells to muscles to generate bidirectional wrist torques, and controlled multiple neuron–muscle pairs simultaneously. Such direct transforms from cortical activity to muscle stimulation could be implemented by autonomous electronic circuitry, creating a relatively natural neuroprosthesis. These results are the first demonstration that direct artificial connections between cortical cells and muscles can compensate for interrupted physiological pathways and restore volitional control of movement to paralysed limbs.