WHAT IS VAGUS NERVE STIMULATION (VNS)?

The Vagus nerve is an important cranial nerve that connects the brain with the body’s viscera. Eighty years of research has shown that stimulation of the Vagus nerve in the chest or neck can alter the operation of brain regions involved in the control of bodily functions. In the 1980s Jake Zabara of discovered that excitation of the vague nerve could abort a seizure occurring in a dog. This finding led to clinical trials of the 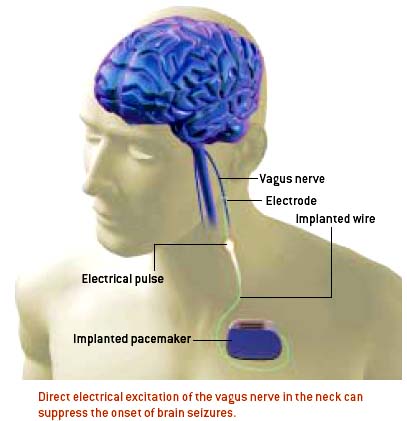 technique and eventual FDA approval of VNS for suppressing seizures. Surgeons typically wrap the VNS electrode around the left Vagus nerve in the neck and connect it to a pacemaker they have implanted in the patient’s chest wall. The VNS apparatus can be programmed to produce electrical stimuli in various intermittent patterns. Researchers are now conducting studies to determine if VNS has therapeutic value for other disorders. The FDA lately approved VNS for the treatment of depression. As with the other stimulation approaches; we do not know if changing how the VNS electrical signals are delivered would produce different brain effects. Our group at the Medical University of South Carolina has investigated VNS within a functional magnetic resonance imaging scanner to determine whether altering VNS parameters achieves different results. If it is confirmed, one might modulate brain regions by varying the VNS pulse pattern at the neck. No brain surgery would be needed.