Since its introduction in 1985, researchers have used transcranial magnetic stimulation as a research tool to gain many insights into the physiology of the brain. Now, increasing research suggests that the technique, which uses a powerful electromagnet discharge to alter brain activity, may also hold promise as a treatment. Research indicates that those with depression and a variety of other brain illnesses may benefit.

Specifically, research indicates that powerful magnetic fields used in a technique known as transcranial magnetic stimulation, or TMS, can alter and sometimes aid brain activity. The findings are leading to:

Starting in 1985 researchers began to find evidence that high-powered magnetic techniques create large effects. That year they introduced TMS and found that its activation over a brain area involved in movement stimulated brain activity and triggered muscle twitches.

At first scientists used TMS mainly as a research tool to gain insights into how the brain works. But in recent years, scientists refined the strategy and found evidence that it can change brain activity and sometimes alleviate depression.

During current TMS sessions (see illustration) a researcher holds an electromagnetic coil against the scalp. It produces almost painless magnetic pulses that easily pass through the skull. These pulses then induce an electric current that alters the activity of the brain's nerve cells. Typically, for depression, the sessions last a half hour and occur each weekday for two weeks.

Recently, several small studies show that compared to fake stimulation, the TMS strategy improves the mood of people with depression without causing any major side effects. A large study, designed to include more than 85 depressed patients, is underway to confirm the benefits. Researchers also are trying to unravel how it works to improve mood. Many believe that depressed individuals have depressed activity in the front part of the brain, and some speculate that TMS works by boosting this activity.

Researchers currently are comparing TMS in humans and animals with another brain-altering therapy, electroconvulsive therapy or ECT, to determine the most effective technique. Doctors often use ECT on severely depressed patients who don't respond well to antidepressant medications. In ECT, electrodes placed on the scalp trigger electrical stimulation of the brain. But unlike the TMS treatment, which creates targeted activity, ECT currents have trouble crossing the skull and create widespread brain stimulation.

In other work, scientists are finding that additional brain ailments may benefit from TMS. For example, researchers found that TMS applied to the front part of the brain speeds up the ability of healthy volunteers to solve puzzles requiring skills in analogical reasoning. Next, they plan to test whether the technique can help reinstate lost abilities in patients with brain disorders, such as Parkinson's disease and stroke.

The research of a test in which a research subject was asked to draw a picture of a
dog four times, at different stages of his exposure to transcranial magnetic stimulation.

Some research also indicates that TMS tuned to emit a low frequency force can reduce brain activity, which suggests that it may help disorders tied to overactivity in the brain. Recently, one study examined the effect of TMS on people who have the brain disorder, schizophrenia, and hear imaginary voices. Directed at brain areas that process speech and may be overactive in the patients, TMS muted the voices. In another example, researchers tested TMS on patients with post-traumatic stress disorder. This condition, marked by anxiety and depression, seems to involve high activity in brain circuits involved in negative emotions. Low frequency TMS decreased the activity in these circuits and improved symptoms.

With continued research, many scientists are confident that magnetic stimulation will help treat these illnesses and many others.

Is there a future for therapeutic use of transcranial magnetic stimulation?

a | Descending volleys evoked by single-pulse transcranial magnetic stimulation (TMS) recorded from the epidural space of the cervical spinal cord in a conscious human subject. Stimulus intensities ranged from active motor threshold (AMT) to AMT + 30% (of maximum stimulator output). With increasing stimulus intensities a series of waves (I-waves) is recruited that result from trans-synaptic (that is, indirect) activation of corticospinal tract neurons. The first of these I-waves, termed I1, is indicated by the dashed vertical line.

b | An electromyographic response that was recorded while the subject was contracting a small hand muscle (first dorsal interosseous) to a single pulse of TMS at an intensity of 110% resting motor threshold. Approximately 20 ms after the stimulus is a large motor-evoked potential (MEP), followed by a period of relative quiescence of background EMG activity known as the 'cortical silent period'. The end of the silent period is indicated by the dashed vertical line. 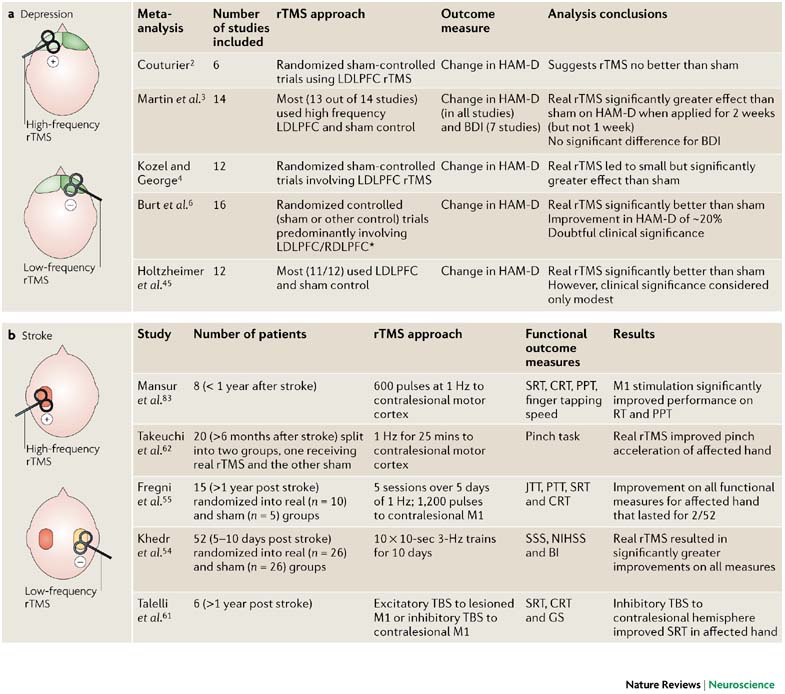 a | Schematic representation of two different repetitive transcranial magnetic stimulation (rTMS) approaches used in studies investigating the effect of rTMS on depression. In one approach, high-frequency, excitatory rTMS is targeted to the hypoactive (pale green) left prefrontal cortex (PFC). In the second approach, low-frequency, inhibitory rTMS is directed at the hyperactive (bright green) right PFC. The table summarizes results from a number of meta-analyses that examined the use of rTMS in depression. 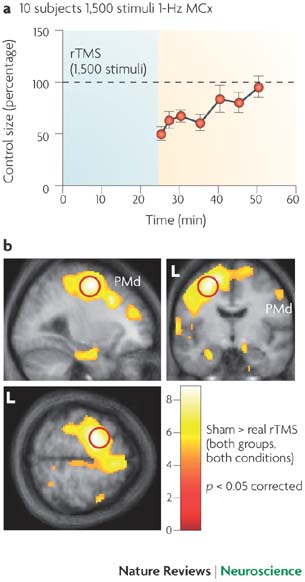 a | Time course of changes in excitability of the motor cortex after 25 min reptitive transcranial magnetic stimulation (rTMS; blue shading) at 1 Hz and an intensity of 90% resting threshold. Data reflect the amplitude of the electromyographic response to a single TMS pulse as a percentage of the amplitude before rTMS. The response is suppressed immediately after rTMS and this effect persists to a decreasing extent for the next 30 min.

b | Brain images from a study that used positron emission tomography (PET) to measure metabolic activity. The colour coding shows the areas in which activity after a 25 min session of real 1-Hz rTMS over the dorsal premotor cortex (PMd) is less than that seen after a sham rTMS session. Numbers in the colour code bar are Z-scores, which indicate the probability that the activation differs from the rest; Z>4 is highly significant. There are significant decreases in activity after real rTMS at the site of stimulation (outlined in red) as well as at many distant sites. L, left side of the brain. Panel a modified, with permission, from Ref. 10 © (2001) International Federation of Clinical Neurophysiology. Panel b modified, with permission, from Ref. 82 © (2003) Oxford Univ. Press.

If the slide opens in your browser, select "File > Save As" to save it.