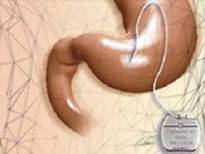 New stomach implants that can "trick" the body into feeling full could transform the way doctors treat obesity.

A number of companies are in the process of developing implants that zap the stomach or certain nerves with an electric current and hopefully can regulate appetite signals or boost metabolism.

The devices are intended for severely obese individuals and aren't aimed at the merely plump seeking to lose a few pounds, the Wall Street Journal reports.

Researchers hope the gadgets will offer a less-risky alternative to major bariatric surgery, which involves reducing the size of the stomach, or bypassing parts of it.

Such procedures can cost $20,000 or more, and by some estimates one in every 200 patients undergoing gastric bypass surgery dies.

One implantable device, the Transcend II gastric stimulator, has been available in Europe since 2001 and is undergoing clinical trials in the

In June, Medtronic – one of the world's largest medical-device makers – acquired Transneuronix, a New Jersey-based start-up company that developed the Transcend device.

Medtronic is now shepherding the implant through the Food and Drug Administration's approval process, and it could be available in the by 2007. 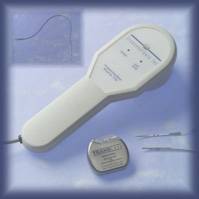 That research could help get health insurers to pay for the implant as a diabetes treatment, since some insurers don't cover treatments for obesity alone.

Some patients from earlier Transcend trials have had the implant for 10 years, and have reported few side effects.

Medtronic estimates the cost of the implant – including the device, surgery and a hospital stay – could be between $15,000 and $20,000.

Doctors involved in studies of the Transcend estimate it will help only one-third to one-half of obese patients – binge eaters, for example, might continue eating even with the device, according to the Journal.

But among those who do have success with the implant, the average patient has lost about 40 percent of excess body weight.

The battery-powered device, about the size of a stopwatch, is inserted under the skin just below the rib cage with a two- to three-inch incision. Two wires from the implant are connected to the outer walls of the stomach and deliver low-level electrical impulses.

"The electrical current appears to trigger the release of a ‘satiety' chemical, which tells the brain that the stomach is full," the Journal explains.

The impulse may also cause the stomach muscle to relax and distend as if full of food, tricking the body into feeling full.

Other companies are also at work developing stomach implants to fight obesity. Leptos Biomedical of is working on a device that sends an electrical charge to certain nerves to boost metabolism. And California-based Intrapace is developing an implant that, like the Transcend, would deliver electricity to the stomach to trigger feelings of fullness.