WHAT IS DEEP BRAIN STIMULATION (DBS)?

David Ferrier and others in the 1880s showed that direct electrical brain stimulation could change behavior and that activation of specific regions correlated with certain behavioral changes. For the past 100 years, neurosurgeons have stimulated the brain electrically during brain surgery, cataloguing the resulting effects along the way. Physicians have long known that electrical stimulation could be therapeutic as well. During electroconvulsive therapy (ECT), a doctor applies electrodes directly to the scalp of an anesthetized subject with the goal of inducing a generalized seizure. For reasons that are still unclear, a repeated ECT session over the course of several weeks is an effective treatment for depression, mania and catatonia. Unfortunately, the technique is associated with memory loss and requires repeated general anesthesia. Because the skull acts as a large resistor that spreads direct electric current, ECT cannot be focused on or directed to specific targets within the brain. 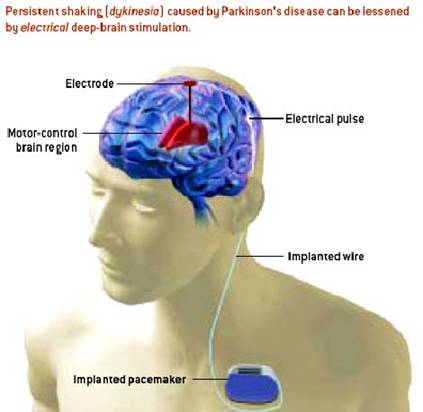 Of late, neuroscientists have explored other methods to electrically stimulate the brain. These new techniques tend to be either more focused or less invasive, or both, than the older ones. Employed in conjunction with the advanced brain-imaging technologies developed over the past two decades, these approaches are being used to build on our recently assembled understanding of how the brain works. Two direct electrical brain-stimulation techniques have been approved for therapeutic use. In deep brain stimulation (DBS), a neurosurgeon guides a small electrode into the brain through a small hole in the skull with the help of three-dimensional images (left). The surgeon then connects the electrode to a pacemaker (signal generator) implanted in the chest. The pacemaker sends high- frequency electrical pulses directly into the brain tissue.

DBS is approved by the U.S. Food and Drug Administration for the treatment of Parkinson’s disease, typically in patients who no longer respond to medication. Within the motor-control circuitry of the brain, several regions (including the internal globus pallidus, thalamus and subthalamic nucleus) are inhibitory in function and so act as brakes on movement. Schematic of the Basal Ganglia of the Brain (left). X-Ray of patient with DBS lead in the Subthalamic nuclei (right)

In current practice, neurosurgeons place DBS electrodes in those regions and then stimulate them at high frequencies to arrest the shaking (dyskinesia) that characterizes Parkinson’s. The technique is being explored as a treatment for depression as well. Little information exists concerning what happens when DBS is applied to other brain regions or when low-frequency pulses are used.  DBS electrodes can be removed with no lasting damage. Thus, the procedure represents an advance over traditional ablative brain surgery in which neural tissue is lost forever.