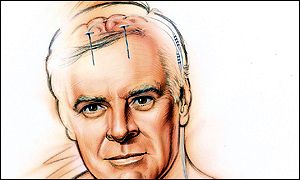 The device is fitted into the brain

Most people with Parkinson's disease in are being denied a treatment hailed as the most significant advance in more than 30 years.

It is estimated that across , approximately 20% of all Parkinson's patients could benefit from deep brain stimulation.

But the European Parkinson's Disease Association (EPDA) says that less than 7% of patients who are suitable for the treatment have been offered it.

The treatment can reduce the tremors and poor balance that are often associated with Parkinson's.

Many patients with Parkinson's are prescribed the drug levodopa to alleviate their symptoms.

However, after years of use its effectiveness is reduced and motor problems, such as tremor and poor balance, increase.

Deep brain stimulation, launched in in 1998, involves surgically implanting two devices which work in a way similar to a cardiac pacemaker.

A neurostimulator, a sealed device containing a battery and electronics, is implanted under the skin in the chest.

This is connected via a wire to four electrodes that are implanted into the brain.

The mechanism generates electrical pulses that are fed to precisely targeted areas of the brain.

This stimulation helps to block the signals which cause the uncontrolled movements associated with Parkinson's.

The lack of access to treatment has been blamed on inconsistent funding, a lack of interaction between specialists involved in the procedure and low awareness of the treatment among GPs.

Professor Alim Benabid, the pioneer of the treatment from the University Joseph Fourier in , , said: "Increasing numbers of patients are receiving this therapy in but in some countries the rate of uptake is not what one might expect.

"Clinicians in have over 15 years of experience with deep brain stimulation and the therapy can no longer be considered experimental in any way as it has a proven safety and efficacy profile over this period."

Mary Baker, EPDA president of the EPDA, said: "The most important concern for patients with Parkinson's disease is improving their quality of life.

"More attention needs to be given to treatments that help to advance this, such as deep brain stimulation.

"The EPDA would like to see access to therapies such as deep brain stimulation improve for appropriate patients across ."

Mike Robins has had Parkinson's for six years. He received deep brain stimulation in 1999.

He said it had changed his life "immeasurably".

"I no longer have this debilitating tremor that made me an object of sympathy for some, and horror for others.

"I am once again the confident person I was before Parkinson's started. I've been given back my life."

Deep brain stimulation is one of a number of effective surgical techniques which may be appropriate for a minority of people with Parkinson's disease.

The Parkinson's Disease Society is backing a trial to assess the most appropriate point at which surgery should be offered.

The World Health Organisation (WHO) has estimated that there are 4 million people with Parkinson's disease worldwide.

It is currently ranked as the fourth most frequent disorder of the nervous system, after epilepsy, cerebrovascular disease and Alzheimer's.

Approximately 120,000 people in the have Parkinson's.

It affects approximately 1% of people aged 60 and over, though it can strike younger people and approximately 10,000 people are diagnosed with the disease each year.